The pine cone tree on its birch base and the little tree crafted from festive green and silver paper were quite unexpected and very welcome gifts received by mail this week from a friend in Maine. They make a great addition to the mini forest she sent me a few years previously, when she led a paper tree fundraising project with her grandchildren.

They remind me so much of the thick, fragrant pine forests of the distinctive northeastern state so different from my native Midwest. I haven’t made it to Maine in a few years, but memories return as I sit at my desk and admire the miniature artistry.

The tiny tree inside the dome was a gift from my husband. A talented designer and machinist, he created this “world’s smallest Christmas tree” himself from exotic wood, metal and Austrian crystal. It’s not easy doing intricate craftsmanship on such a tiny scale.

We didn’t put up a traditional Christmas tree, but our holiday will still be special thanks to these thoughtful creations and the other small decorations displayed about our home, many of them gifts I’ve received from friends over the years. 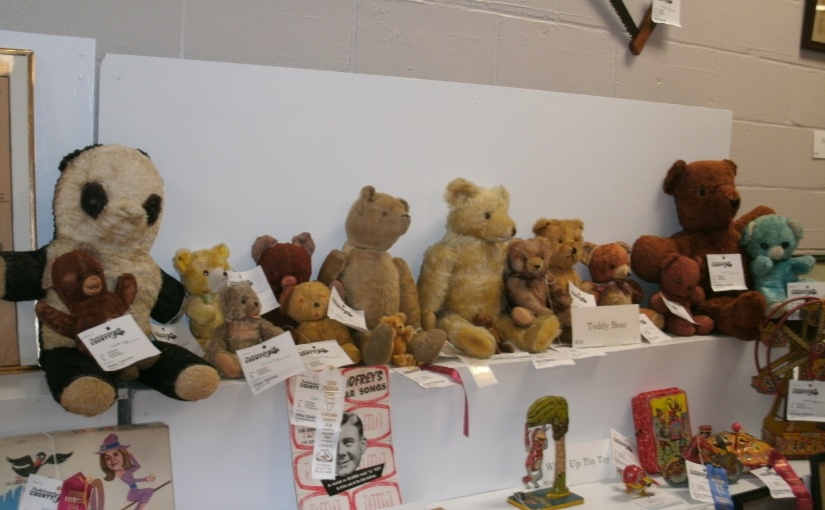 I wonder if any of these teddies who posed for a local hobby display this fall, were part of a child’s Christmas, many years ago.

I still have my little beloved Teddy. He came at Christmas, one year when I was really litte . . . I’m not sure I should reveal the date . . .

Did any readers receive a Teddy for Christmas during their early years?

What dad wouldn’t love this cool recliner featuring themes from all types of sports teams.

Not sure if it came this way from the factory or if a mother, daughter, son, with a talent for upholstering customized it at a later time? 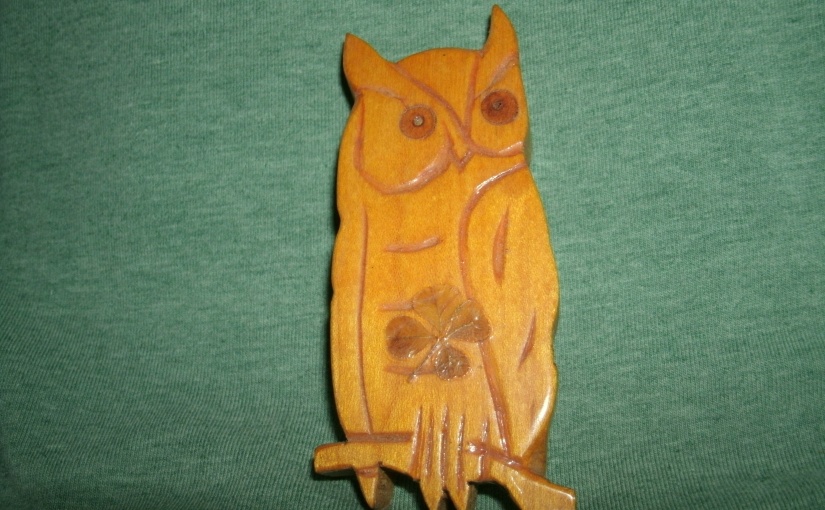 Bill was a friendly, talkative, yet gentle soul who came at least a couple of times a week into the store where I worked some years ago – to shoot the breeze or share a good word as they used to say back in his day.

In sorting through a cabinet drawer one recent morning, I discovered a treasure he created for me – I won’t say how many years ago as it would make me sound older than I think I am.

Bill said he had crafted carvings like the lovely little owl, whittled from wood, which he placed in my palm, for others too. Still, I felt special to receive the lucky charm as a gift from him. I wondered how he managed to come across the four leaf clover affixed by varnish to the owl’s surface.

In my youth I had searched often for these legendary keys to good fortune, yet never found even one. Bill said he could easily spot them, that they’re not really all that rare. I’m still not sure what gives some people the ability to discover them. Maybe it just takes sharp eyesight and patience. But I suspect it may require more, perhaps the special way of looking at the world Bill had.

I always felt a special connection to the gentleman, caretaker at a local senior living center, even before he shared a heartwarming story with a personal connection – a tale of a time when my grandfather once granted his mother and him a simple yet valuable favor during the difficult days following the death of Bill’s father.

Bill and his mother eked out a meager living by offering grocery items for sale from a store attached to their home. My grandfather, a county commissioner, stopped in one day to purchase some soap. Bill’s mother informed him the transaction could not be completed, as the sale of taxable items, at the time, reqired merchants to purchase special stamps and she could not spare the funds to purchase them.

According to Bill, my grandfather left the store, saying he would be back soon. He returned bearing a generous supply of the stamps, which he donated to the tiny business, enabling it to remain open.

The gesture remained a special memory for Bill, many decades after its occurrance. In like manner, Bill’s gift of the story and the good luck charm remain special memories for me, all these years later.

My grandfather’s consideration of the difficulties Bill and his mother faced, Bill’s generosity in sharing with me a simple gift with so much meaning, and a touching memory of my grandfather who passed away before I came into being, are shining examples of the concept of “paying it forward”, something we all need to do much more often.