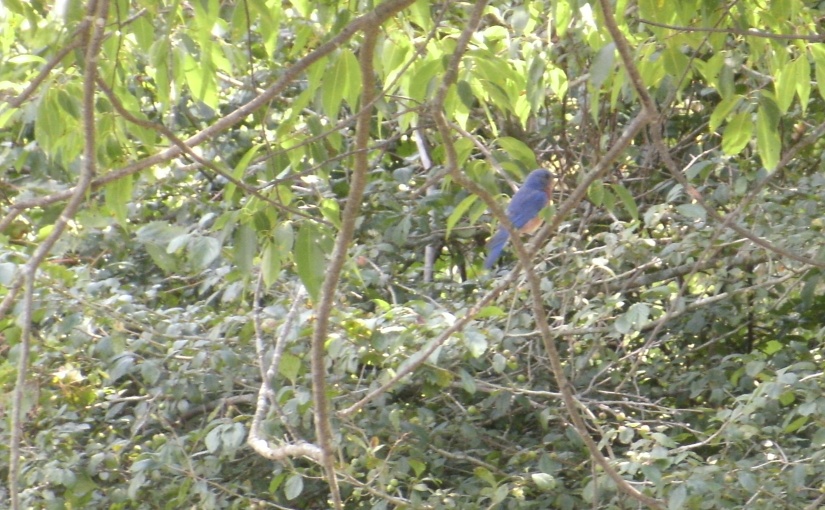 I’m surprised I never encountered these very special and beautiful avian creatures when I was young. Certainly a few must have resided in the mostly rural area where I spent my childhood. But I never saw them.

When I grew a bit older and became a devoted bird watcher, I discovered many Eastern Bluebirds in the fields surrounding our home. Why do we overlook so many features of our environment until the day we decide to actively seek them out?

Actually, the species was in decline for many years, due to the activities of farmers who for many years cleared the woods and fields of dead trees, the cavities of which provided prime nesting spots.

Thankfully one day concerned citizens began to build bird boxes especially for bluebirds, with custom interiors and opening measurements specific to the species’ preferences. They erected the boxes on posts, arranged them in long lines referred to as “bluebird trails”. During the late twentieth century these trails were strung across suburban fields and lawns offering Eastern Bluebirds the means to multiply once more.

Farming practices eventually changed, too. Trees were permitted to grow once again along fence rows and edges of meadows. The resulting mix of open land for foraging and cavities for shelter helped the bluebirds rebuild populations.

We see them frequently now, though much more often in summer, when they emerge from the cover of wooded swamps. Many survive the winter there, feasting on dried fruits and berries.In the warm seasons they flit over lawns, pastures and fields, snatching insects from the air.

The lovely azure blue species may be attracted to feeders with an offering of meal-worms, available from pet stores and sites specializing in bird feeding supplies.

Offer them in a dish that’s accessible, yet with sides tall and straight enough to keeps the worms from escaping. Catbirds and other avian varieties which don’t normally frequent feeders will come close to human homes for meal-worms too.

I can’t say that I have personal experience with offering this form of bird fare myself, but I’ve known many wildlife watchers who have successfully attracted beautiful bluebirds and other favorite species by supplying their feeders with this choice.

I have attracted many of my bluebird neighbors simply by offering nesting boxes; some home-built, others purchased from a retail outlet.

Whatever method one utilizes to successfully invite them, the presence of these graceful little blue and russet-hued flying jewels will deliver many moments of delight.

Penny Mason is the name behind Penny Mason Publications and The Penny Mason Post. The Penny Mason Post is a variety blog, based on the theme of "vintage values for today's times". The Post's articles address favorite topics of mystery stories, pets, nature, vintage style and culture, classic rock music, coastal living. The site includes observations, innovations, memories and musings on these and similar topics by associate writers, Posts include suggestions for bringing the best of mid-twentieth century culture into today's lifestyle to relieve twenty-first century stress and make life better for all of us. Penny Mason Publications offers freelance writing and content creation services, as well as publications by associate authors. View all posts by Penny Mason